Vase mode is an incredible feature for making really nice 3D prints. I'm a big fan of printing out vases, since they look really good, are functional, don't use a lot of material and are great for giving away to people who don't have 3D printers. 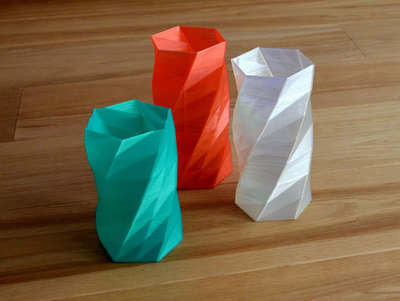 
Single outline corkscrew printing mode (vase mode): The extruder will print with one outline/perimeter shell and won't make any retracts. This means that it will slowly move up in the Z as it prints, imagine spiraling upwards, instead of printing a static layer, than moving upwards to do another layer. This means there shouldn't be any seams in your print or any spots where retractions occurred, meaning that the prints come out extremely smooth.

With vases the best settings I've found are Zero top solid layers, 3 Bottom Solid Layers, and under the Advanced tab enable "Merge all outlines into a single solid model".

Also, under the extruder tab, you change your extrusion width slightly if you want to adjust the thickness of the walls of the vase. For instance, if you have a .4 mm nozzle, but want a thicker vase, you could change the Extrusion Width to .50 mm.


Overall though, Vase model is for much more than just vases. Really any part that has a single "island" that can be printed without support and 0% infill is a good candidate for vase mode, since it will produce extremely clean perimeter outlines with no retractions. For instance, if printing a model of a pyramid, you could definitely use Vase-mode and get a really nice finish!

Lastly, vase mode will work for parts that do have multiple island - a great example is this part (http://www.thingiverse.com/thing:323038). It transitions from multiple island (2) at the lower half with the tail and body, but then to a single island at the top. You might look at it and say because there will need to be retractions between these islands that vase mode wouldn't work, because the tail would be an island and the body would be an island. But the software will actually intelligently switch back and forth between normal printing mode and vase mode if you try to slice that model using vase mode settings. This means that even if a model has areas with multiple islands, that aren't compatible with vase mode, you can still use that settings, and the software will automatically choose the best method as it goes. 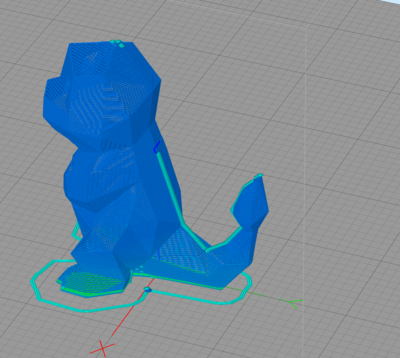 How large an extrusion width can one reasonably set things to if I have a 0.4mm nozzle? The default (0.48mm) leads to too-thin walls on my prints, making them very fragile.

i think that will vary a bit on the design of your nozzle. some are sharper than others. my e3d for instance has a larger flat area so i can get wider. if the nozzle comes to a sharp point then you cant get too wide with it. my nozzle i have easily done .65 width with a .4 nozzle. i frequently print at .55. this is almost my normal print width on most things.

dsegel wrote:How large an extrusion width can one reasonably set things to if I have a 0.4mm nozzle? The default (0.48mm) leads to too-thin walls on my prints, making them very fragile.


I agree with JIMC about extruder design, but also a big thing is temperature and material. The higher the temperature, the lower the viscosity will be meaning the material will have a much better flow.

Great tip! One thing though: what's with the print speed when printing in vase mode? It's horribly slow, like 10 mm/s. Is that what I should expect or have I missed some setting?

Yes, you're right. Found out this morning and now print speed is much nicer.

Another question about vase mode - what settings should I change when vase comes out leaky? My bottom layers doesn't fill completely apparently. It's when the infill layer meets the perimeter at certain angles that very tiny holes appear. I've tried increase extrusion and add another layer but that doesn't help 100%.

ejeklint wrote:Another question about vase mode - what settings should I change when vase comes out leaky? My bottom layers doesn't fill completely apparently. It's when the infill layer meets the perimeter at certain angles that very tiny holes appear. I've tried increase extrusion and add another layer but that doesn't help 100%.

Increasing the number of bottom solid layers can help a lot, as well as slightly increasing the extrusion multiplier by 3 or 4% as well should help.
Post Reply
13 posts