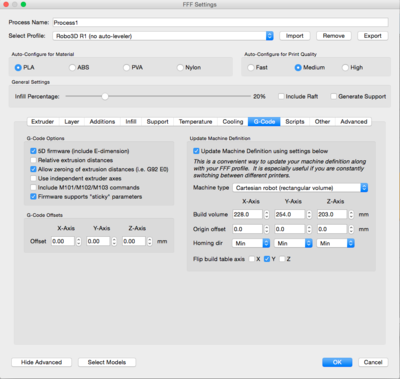 5D firmware (include E-Dimensions): 5D firmware means that your printer supports X,Y,Z,Speed and Extrusion amounts. Almost every printer currently on the market does, so this should remain checked for 99% of printers.

Allow zeroing of extrusion distances (i.e. G92 E0): When using Absolute extrusion mode, the printer keeps a running virtual position of the extruder. Using the command G92 E0 can reset this virtual position to zero, this command is in most the starting scripts for RepRap machines prior to and after priming. Certain printers have firmware compatibility issues with this command and certain printers (relative extrusion machines) don't need G92 E0 commands, so this command will vary from printer to printer.

Include M101/M102/M103 Commands: The tool-tip states that these are legacy commands and not used by modern printers. In looking up these commands this was what I found they used to do (incase your interested):

Firmware supports "sticky" parameters: Sticky commands is a great way of preventing much larger G-code files. The way to think of "sticky" commands is something won't change unless it's told to change.


Build Volume: This is pretty straight forward, the only time that it gets a bit tricky is with Delta style printers. For a delta printer, take your diameter and multiply it by .707 (Since Simpliy3D measures the largest square that will fit in your build-plate), you will still get to use your entire build volume when printing, it just uses a different number when setting the build volume.

Homing Dir: This setting doesn't change the print instructions, but just changes the G-Code previewer. You can set where your homing endstops are relative to your axis that way when Simplify3D has a G28 command (home all axis) it will know where the extruder gantry is.

Flip Build Axis: This is for the build area in Simplify3D, generally can leave this as default. If you need to flip one of the axis relative to your origin for your printers configurations you can do so from here.

I'm puzzled how negative G-Code Offsets can be applied. I have a Vertex K8400 printer, which has end stops on each axis. When I home any axis it moves the print head (X,Y) and/or print base (Z) until it hits the end stops. If that is so, how is it possible to apply a negative offset, eg for Z - the end stop prevents moving the build plate any closer to the nozzle.

Positive offsets are clear. Maybe I misunderstand the concept or the mechanics or FW, or is it just for certain printer types?

Your first layer is likely printed at Z=0.2mm or something like that, so it's pretty easy to apply a -0.05mm Z-offset. That just shifts the Z position to 0.15mm for the first layer.

If you try to apply larger offsets to where the Z-axis would actually go negative, the printer's endstops will prevent you from moving there, so you're already protected

OK I think I understand, but I still think it won't work on the K8400.
To calibrate Z I home the Z 'platform' then I raise/lower the the print plate relative to the platform so that it's 0.2mm from the tip on all corners, but the Z platform is still at the end stop so I don't see how I can move it any closer using. Or am I barking up the wrong extruder?

Really thanks for sharing the technical analysis. Every time you share a new, informative and helpful thread with us. Keep sharing.
Trommela
Post Reply
6 posts • Page 1 of 1