Printing in a loop?

Printing in a loop?

I am curious to if anyone has experimented with Gcode to:

Once a print has finished, allow it to cool then use the print head to push it off of the build platform (into a bin or something), then start the same print again and loop?

The two printers we use mostly are Taz6 and UltiS5

Never tried and interested whether is it possible at all

Not sure if I like that idea. Some prints are really hard to break off the bed.

How about this instead?

I tried to post this yesterday, to find it never got posted?!

Not what your asking for, but I would be nervous if a print stuck a little to hard to the bed.

It's risky counting on the part not adhering strongly enough to cause problems such as belts jumping cogs... a host of problems.

Having said that, once your get past that problem, creating Gcode to do what you want is easy. It can be an Ending script or a separate-stand-alone code.

Nothing special needed - just the gcode for the action you want. Here's an example of a Stand-Alone gcode that simply makes some moves (shown via using the 'Preview Gcode' feature in simplify).

Gcode and Screenshot of the moves are attached... 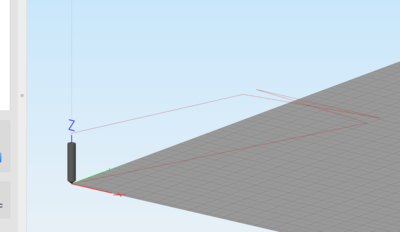 It is doable. I used PLA, on a glass bed. Once the print was done, it would pop the print off the glass, then start over again.

All I did was add a few lines of gcode at the end of the file. The file would move the print head to the back of the printer, then move toward the front at a slow speed, then it would print a file from the SD ( same name as the main file).

I'll see if I can find the video I took of it clearing the bed, and post it later.
Post Reply
6 posts • Page 1 of 1